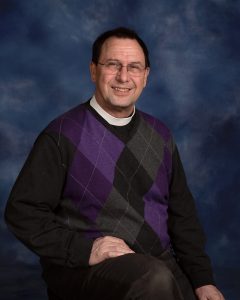 Ray Bonin grew up in Lynn, MA, the next to youngest child and youngest son of a large Roman Catholic family. As a young man, he decided that he had a call to the priesthood, delighting his family who hoped that one of the sons would become a priest. He attended Seminary High School in Hamilton, MA to begin preparation, then attended Marquette University and received his M Div from Washington Theological Union.

He joined the Carmelite Order in 1977 and was ordained as a priest in 1982. For six years he taught in a Carmelite school in Joliet, IL; then volunteered to serve as a missionary in Peru. He served Roman Catholic parishes in Peru from 1988 to 1996. Upon returning to the United States in 1997, he left the priesthood and made a new life in Orlando, FL.

Eight years later, he returned to New England where his spiritual journey led him to the Episcopal Church and another opportunity for ministry. He was received as an Episcopal priest in 2012 and soon after was called as priest-in -charge (now rector) at the Church of the Transfiguration. Along with his parish ministry, he works at the Sunshine Soup Kitchen in Derry extending the love of Christ into our community. 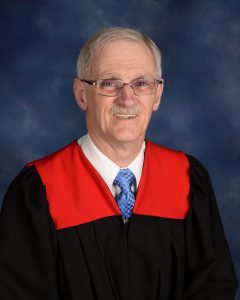 Larry Thompson grew up in Medford, MA, the youngest of three Thompson children. He began studying piano at the age of eight. In his teen years, he was playing piano for his small home church and studied with Anastasia Dolan at the music school she ran in her Malden home.

Following graduation from Medford High School, he served in the U.S. Army for three years. He was stationed in Germany and, even there, played for a Southern Baptist church in Heidelberg attended by soldiers from nearby army bases. Upon his discharge from the army, he enrolled at Eastern Nazarene College receiving his degree in music education. He then studied applied piano at Boston University with Dr. Leon Tumarkin and Anthony DiBonaventura, a concert pianist of renown.

His next church job was as organist at Ruggles Baptist Church in Boston. While he still loves playing piano, the organ now became his instrument of choice. He served at Central Baptist Church in Franklin, NH for three years and Calvary Bible Church in Derry for over thirty years. He had “retired” from active church ministry, when a fortuitous call from, then senior warden, Rick Cagle made all the difference bringing him to Transfiguration where it has been his delight to serve the parish as music director.

Come Visit Us At

10:00 AM Holy Communion with Hymns

Shop Online and Support Us

Sign up for iGive with this link. Click a link to your favorite stores and we could get a small percentage of your purchase at no cost to you.

Copyright © 2023 Church of the Transfiguration. All Rights Reserved. Theme by ILoveWP.com